Room service for two in the old Plaza Hotel. Now the Granada Homes retirement center it was once the first modern hotel on the downtown horseshoe of the San Antonio River. In fact played a critical role in the development of the riverwalk.

Hotel GM Jack White was one of the earliest and staunchest advocates of Robert H.H. Hugman’s river beautification plan;  The Shops of Aragon and Romula. It wasn’t till Hugman started pouring concrete and laying limestone nearly a decade later in the construction of the modern day riverwalk that White disgracefully turned on and eventually led the successful effort to have Hugman fired. 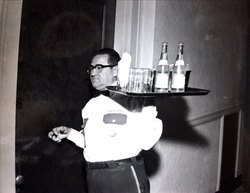